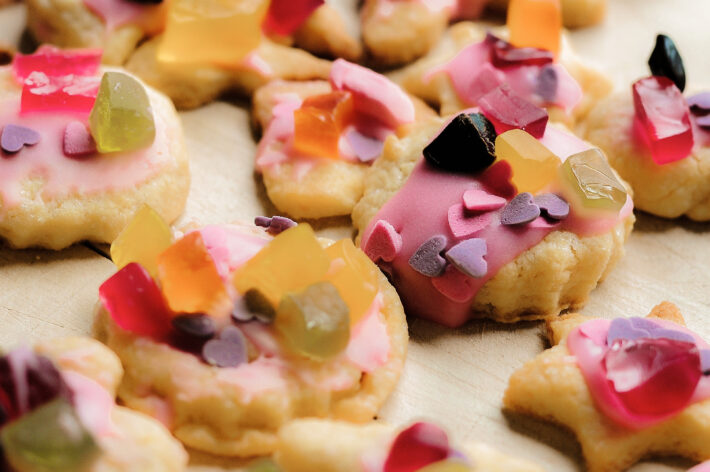 BEING HAPPY AND thinking positive thoughts is hard work. I’m sure there’s some sort of scientific study that would support this theory and say it takes at least three times more energy to think good things than bad things.

Which is fine by me, as it uses more calories.

And you know, using up calories means you can eat and drink more, which is also fine by me.

What’s also fine by me is making pastry.

Pre-lockdown I’d never touched the stuff, I’d eaten plenty, but I’d never considered the actual art of making it. Pastry, I thought, that’s what bakeries are for. Little did I know that with so few simple ingredients (flour, butter, water, if you’re still one of the uninitiated), you could make so many things.

And I don’t want to sound like I’m tooting my trumpet too loudly, but I have found a certain satisfaction and pleasure in plunging my hands deep, pounding my worktop and liberally slathering surfaces so things don’t stick.

This, I believe, is the art of baking.

However, what nobody ever told me, (and this may happen to you as well when you’re following a recipe), is that it’s fine to experiment.

I don’t watch cookery programmes. I’ve heard of Bake Off, Cake Off and Take Off, but given I’m not a watcher, I haven’t picked up any handy tips in the kitchen. And since my mum’s best friend was the microwave, I am what you’d term a late-learner, or should that be latecomer? Regardless, I’m not a woman who especially knows her way around the kitchen.

And thus with this non-history, following a recipe, to me, is like some sort of school exam. I am studious. I am attentive. I am prepared. I get all my ingredients out, line them up, measure them to the nth degree and worry unduly when I realise I haven’t got one such item I thought I had.

That was, until I learned: the art of substitution.

Substitution is everything. I have swapped heads for shoulders, rosemary for garlic, flour for water, you name it, I’ve tried every experiment in my kitchen-cum-school-chemistry lab and it’s turned out marvellously.

And I think it’s because it boils down to the magic that happens when you substitute something you don’t have for something you do have: you never really know how the end result will taste.

Thus, with such an act, you mentally prepare yourself for failure.

Unconsciously, the brain looks at the mess you’re creating and lowers, nay, submerges any expectation of an edible end result. Thus, when the final creation appears, the fact it even appears is a minor miracle in itself.

Now, I don’t know if said neurotransmitters also affect sight, taste and smell, I’m sure they do, because so far, every kitchen creation has been wonderful.

And to this, I attribute the simple art of substitution.

Recipes are all very well, but you know, school exams were really rather boring, chemistry was way more fun!