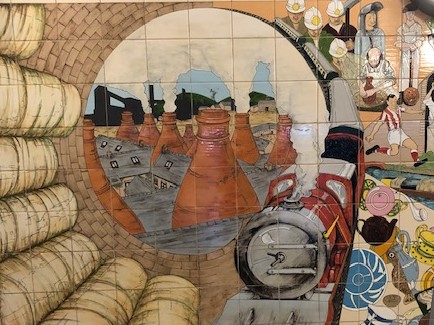 The voicemail at 9am this morning should’ve alerted me to the sort of day it was going to be.

“Sam, I’ve just got home from my nightshift and I’ve got water pouring through the ceiling!”

I looked out of the train window. This was to be my first time doing property inspections in Stoke by train. No car to whizz about between places or pick things up, now it was down to taxis and how far my little legs can carry me.

I make a number of phone calls in a desperate bid to locate the upstairs tenant, the whereabouts of the key and a plumber.

Of course, none of this is easy. It never is.

And so, having arrived in Stoke and locating the spare key, I put on my I-know-how-to-try-and-fix-anything-cap and find myself in the world’s smallest gap wedged between the wall and the unit trying to turn the isolation valve, which in my wisdom of knowing-naff-all about plumbing, is about the closest I can get to doing something until the plumber arrives.

We stand, all three of us, staring up at the ceiling watching the drip, which we all agree has now lessened, albeit not stopped.

I leave for the rest of my inspections, full of apologies and hopeful the real plumber may arrive soon.

A knock on the door while with one of the other tenant’s in the buildings reveals a person I don’t expect to see: A policeman. I look at him curiously and back to the tenant I’d be sharing a cup of tea with.

I look at him confused, have I done something wrong with the isolation valve?

“Of course,” I reply and hurry away with them and give them the keys. They quickly pull out blue gloves which they stretch over their hands and make their way up the stairs. My eyes follow them, staring at what is happening.

They turn to me.

“We’ve had a welfare concern call.”

I stand, stunned. I’m sure it was only an hour ago I was with the tenant. She looked fine. I pause on the landing. Do I wait? Is it my business? Conscious I didn’t want to be a nosy parker I go back to the other tenant’s flat who is concerned by the police presence. I stifle his concerns as best I can, given I have no clue what is happening.

We continue to drink our tea and chat about the world.

Another knock on the door.

I point them in the direction and shakily sit back on the sofa.

The tenant eyeballs me directly.

“Sam,” he says, turning to me full-on “in all my years of living here we’ve never had the police come, and now two cars and four officers?”

“I know,” I reply, nodding and shaking my head wondering what to do.

I glance at the clock and realise I have to leave to get my booked train back. My tenant insists on giving me a lift.

“What do we do about the police?” I ask him, wondering if he is equipped to know what to do in such situations.

“I’ll check what’s happening when I’m back from the station,” he says assuredly.

Half an hour later I’m on the train when the calls comes.

“She texted an ex-boyfriend pretending it to be from somebody else and said she was dead, that’s why the police attended.”

“Yes,” he replies, “but obviously she needs help.”

“Yes,” I agree and ponder what to do. This sort of situation is not in the landlord everyday manual of business and so I’m out of my depth – what’s the right thing to do and what’s the wrong thing?

I call her dad. I apologise profusely if I’m out of line, but I feel he should know. He thanks me and assures me I did the right thing.

Fifteen minutes later the plumber calls me, the police are just on the way out as he is entering. He notes this to me, he’s bothered by the presence of the boys in blue on the scene. He checks the issue and calls me with his thoughts on what it may be and I agree to his idea. He goes off to his van to get the tools so he can make the fix.

Equipped with his tools to fix the leak he returns to the flat.

But the tenant won’t open the door. She’s gone silent and is refusing to open the door, answer the phone or any other method of communication.

I say a small prayer to any God who will listen.

The tenant from the flat downstairs texts me: I don’t know what you did Sam, but the leak has stopped.

I smile briefly. I know it’s only a small respite, but at this stage I’ll take anything.