“It needs the landlord to attend to see how bad it actually is.”

That’s what the email from the maintenance company said to the letting agent.

As the landlord of the said property, this line didn’t fill me with warm, fuzzy feelings.

It instead, left me with a feeling of dread.

Especially when the said property is some 120 miles away from home.  (This is just one real downside to remote property investment).

I cast my eyes back over the rest of the email to look for any sign of hope.  There was none.  It was literally a litany of shit.  Which was going to cost a whole load of money to put right.

“Bollocks” I thought to myself.

I called the letting agent who informed me that until the property was sorted they were unhappy to do any viewings.  It would be a waste of time to show anybody, they told me.  Unless of course the new person was looking for a shithole like mine.  That was what I thought to myself, but I could tell from their tone this was not the time to add a sense of merriment.

I needed to take the situation seriously.

Which I did.  Especially when I saw that the maintenance company had quoted £1300 to paint the two bedroom apartment.  £1300 just for painting, like right.  Like, NO.

I was duly informed that said decorator was Dulux approved and all work was guaranteed.  Which is great.  But, you know, you need to cut your cloth accordingly.  This is not a flat in Kensington where incoming tenants will want to know your decorator’s credentials.  This is a flat in Dudley.  I’m not going to say anything more about that.

So, I decided to take action.  As a self-appointed master painter and decorator (I did decorate that ENTIRE 129 sqm house in Waltham Cross on MY OWN) I packed my bags and headed off down the motorway to do my bit.

Now, it’s fair to say I hadn’t planned this as well as I could have.  But, there are mitigating reasons here, which were – I had no idea what was actually going to be required.  And that makes planning pretty difficult.

However, I had booked myself a room in a house with AirBnB and I did have a list of “handyman” telephone numbers which I’d got off Gumtree.

Oh, and I had a bootful of paint, brushes, rollers and gloss.  And a radio.

The flat is a two bed ground floor apartment: 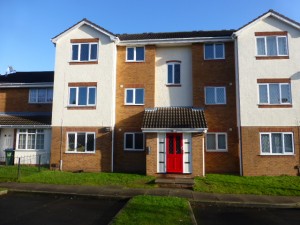 Upon entering the flat, the key thing which I noticed and you can’t see so well from these photos is that it stank of smoke and was dirty.

The kitchen and bathroom have seen better days, but actually given the area, they are serviceable and will do the job once clean.

Right, let’s get to work…

Paintbrush at the ready.

Bugger.  Previous tenant has taken electric meter key and I have no light or heat.

So I start painting the lounge ceiling.  It’s artex which means I am having to use a paintbrush.

One hour later and having managed just a few millimeters of coverage, but feeling like my arm is going to drop off and that I may wither into a hypothermic coma in the minus degree temperatures, I am verging on the realisation that £1300 for painting this entire apartment is a great price.

But having booked and paid for an Airbnb room, I was not about to give up…just yet.

So I decide to get some extra help and call the “handyman” numbers from Gumtree.  Four calls in and nobody has time to fit me in for another two weeks.

I carry on painting some more.

But as my brush delicately licks the ceiling, my motivation drips out my pants.  At a gushing speed.  So quickly so, I almost fall off the ladder to find my phone to call the said maintenance company who quoted £1300 to paint the apartment.

The guy on the phone sounds super nice – competent and like a damn fine decorator (if there’s such a way you can tell if somebody has great painting skills by the sound of their voice).  Anyhow, given I’ve now lost all feeling in my hands and the ceiling is streaked with my pathetic attempts I’m on the verge of giving the go-ahead…

Until he informs me he can’t fit the job in for at least three weeks.

“Three weeks?” I repeat incredulously, as though he’s told me I could lick the place clean with my very own tongue within 15 minutes.

“Well, I know all landlords have their own property as their number one priority,  but unfortunately we have a queue of landlords all wanting to be that priority and we just can’t do everyone today or tomorrow”.

Too. Fucking. Right. I think to myself.  My property is my number one priority and if you can’t shifty your paintbrushes over my neck of the woods sooner than you can say “sign here” to an excited tenant then it’s a non-starter.

Because let me tell you – me waiting three weeks for your “professional painting services” is like at least 3 weeks lost rent – PLUS the time it will take you to do the work.

Go figure – that’s at least ONE MONTH’S lost rental PLUS the cost of the works.  And that doesn’t even take into account the fact that I need to shell out for replacing the carpets and lino.  Or the dreaded stealth landlord tax – empty property council tax!

So I texted a couple of tenants in Stoke who I knew were looking for work…did they fancy a day trip to Dudley to help me paint?

One had the headache from hell (nothing to do with me) and couldn’t get out of bed let alone think about paint.

The other asked me for the address and pinged me back that he was on his way.

And in that moment I felt crap.

I should have felt great.  But actually I felt a dumbass.  Why on earth was I dragging my lovely tenant from his warm home to this freezing smelly place to do a job that we couldn’t do in the time allowed.  We didn’t even have light for Christsakes!

So I called him back – I told him I had made a mistake, that the job I thought we could do, couldn’t be done.

And he just turned round to me and said “Sam, I’m on my way.  Don’t worry, everything will be allright after we’ve had a cup of tea. Everything always looks better after a cup of tea”.

And I didn’t have the heart to burst his bubble of tea-infused optimism with the fact that while I had a kettle – I had no electric with which to plug said kettle in and make a cup of tea.

But, what he did was enough to spur me on.  His willingness to drop everything to help me was enough to make me realise I was not painting the Sistine chapel and that I needed to damn well break out the rollers and get on with it.

By the time he arrived, over one hour later, I had already painted the lounge and kitchen ceiling.  A feat I didn’t think was possible just one hour before.  But that is the power of positive thinking and a can-do attitude.

Upon his arrival I confessed I had no electric, couldn’t make a cup of tea and that we only had a few hours before we would lose the light and not be able to see what we were doing to paint.

He didn’t even squint or rub his chin in that way tradesmen do when they’re surveying how much they’re planning to shaft you for.  He just tossed off his jacket in a very meaningful cowboy like way and said: “Where is the paint, let’s get started”.

And so we did.

We painted and we cleaned and we chit chatted and we sang to the radio.  And the previous arduous task which I didn’t think I could do, suddenly started to get done.

We worked well as a team – me on roller and him (being taller and more deft in his handiwork) on the brushes cutting in and bordering.  Walls whizzed before my eyes and before I knew it darkness had fallen and we could no longer see.

But, it didn’t matter.  At 4.20pm – just a few short hours after we had begun, we stood agog as we realised we had painted ALL the ceilings and the walls throughout the entire flat!

Admittedly, my shoulder felt like it no longer belonged to my body and my hand had gnarled itself into a roller-holding statue to Saint Dulux – but that’s a small price to pay for being one half of a Tour de force painting team!

We patted each other on the back and zoomed off – him to his warm home and me to Bargain Madness to pick up some “little touches” for the flat.

At 8.30am the next day, once it was light enough to see, we carried on painting, cleaning, painting, cleaning.  Doors, frames, windows and skirtings were glossed.  Tiles were scrubbed.  Pictures were hung. Old dirty carpets got ripped up and removed.  Carpet people came to measure and quote.  Rubbish got cleared.  Ovens and fridges were spiffed to immaculate newness and before we knew it the light dwindled and darkness was upon us again.

But this time as we surveyed the newly scrubbed floors and painted surface of EVERYTHING THAT DIDN’T MOVE we realised we had done it.

I couldn’t believe it.

I kept looking round the flat expecting another room to suddenly pop up and wave it’s hand to be painted, but it didn’t.

The moral of the story: Don’t give up before you start.  Just make a start.  Then keep going!!!

As a side note: the property let to the first viewer who is moving in next week!