And I didn’t just make that word up – antibubbles are real!

But, the key point about an antibubble is that it is a type of bubble which can sink.

What has this got to do with the Liverpool property market?

Well, let’s take a look at this property which is coming up for auction and which I think is a classic example of an antibubble. 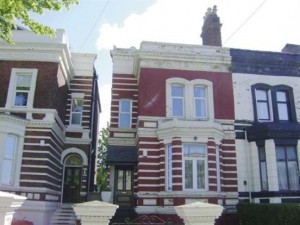 I know the property looks quite pretty from the outside – something about it reminds me of a ruby coloured Everton Mint.  Or maybe even a seaside stick of rock.

Unfortunately, it’s not the whole property for sale, just the top floor flat which is a one bed.

Which I guess is probably all you can expect with a guide price of £3,000.

So in 2006 this flat was bought for the princely and over inflated bubble (the proper floaty bubbly variety) price of £125k.

7 years later and the bubble has turned inside out.

Or maybe it just *popped*

Because, the floaty, bubbly bubble price has become a droopy, sinky, antibubble price…loss.

Or maybe that is what is known as a plummeting antibubble.  Or maybe just a belly flop?

Which I reckon has got to be a property antibubble by anybody’s standards!