Today I can’t decide if I had a lucky escape…or if luck is on my side.

So the story starts last June – this diddy shop came up for sale in Lewisham, London.

However, it was located on a major road and had potential for high visibility for an incoming business.  I pondered to myself about having a London branch of Gorgeous Homes…

I looked into the property more: I was a little deterred by the multiple bankruptcy petitions registered on the title, and I was rather perturbed by the “tunnel” which council records claimed existed which linked a subterranean floor underneath.  “Oh well”, I reasoned: “that’s a whole extra floor I didn’t know existed!” However, the major issue for me, was the planning history showed that twice before the planners had refused change of use from the present A1 usage to A2 -which is what I would need to use it as a property lettings office for Gorgeous Homes.

And I watched as it sold at auction last June for £65k.

But that was not the end of the story.

Just three months later, in September, I saw the property was back in auction again with a different auction house.  And it had a very low guide.  I mused on it for a short while. But, left it.

It went to auction – and failed to sell – even though the reserve was a measly £48k.  That’s a massive £17k less than what the current owner had paid for it just three months prior!

And then the next month, I see the property listed with a different auction house and again it doesn’t sell!

And then it all goes quiet for 6 months.

Until this boomerang of a property re-appears at a June 2012 auction.  Again, it’s with another different auction house – but this time it looks rather different.  This time the shop seems to have morphed into some strange mongrel property – a bit of a cross between a bus shelter and a wall! 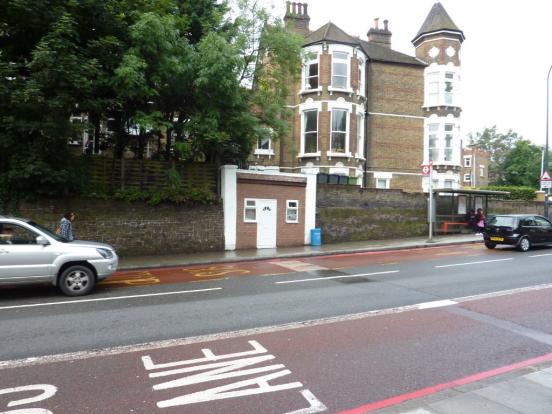 On top of this – the property is now rented at a whopping £240 per week – which on the latest reserve of £54k would produce a mind boggling yield of 23% in London!

And again it doesn’t sell.

Come July 2012 and there it is again with another auction house…and again it doesn’t sell.

Then just 2 weeks later…it’s back again – and again it doesn’t sell!

And so curiosity got the better of me: Was it a sign?

Did I keep seeing this property at auction and did it keep not selling because it was my *destiny*?

So I looked into it again – I had to!

And I did chuckle when I saw in the legal pack a special condition which stated: “time of the essence” which in basic English means the owner is desperate to get rid.  So desperate, in fact, you will potentially be completing the sale in just 5 days! (as opposed to the usual 28 days).

So having looked into it more what do I think?  Hmmm…with the council deadline looming fast I think that property just got quite a bit cheaper!