Buyers remorse?  I felt a twinge or two.

Just 5 minutes after collecting the keys to my new property, I attempted to open the window for some fresh air. 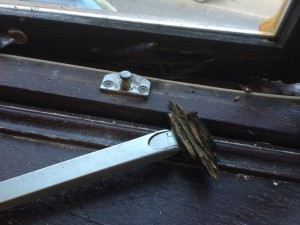 Yes, the latch came off in my hand.

Not quite the start to the renovation project I was expecting.

But then the “easy” buy to let property experiment has not had any of the starts I expected.  For the first time in my life, my property purchase had been down-valued (for reasons that were never explained to me) and had already put my refurbishment budget in the red.

Now my Super-Scrimpers budget was about to be blown apart by the replacement windows.

I was pretty frustrated to say the least.

Everything I had originally planned, had gone to pot.

But, I guess that’s the nature of the beast.  Shit happens.  Often.

You want to do a good job – but buy to let is a business.

So I screwed up the original plan and started again.

Unbelievably for the first time ever, the renovation has completed quicker than I planned and, fingers crossed, has come in at an acceptable budget given the situation.  I’ll post all the before and after photos plus all the sums involved shortly, but for now, just take a look at the difference the new windows have made:

I think it’s a definite case of woe to wow!

Here’s the wrap up video and full property tour: