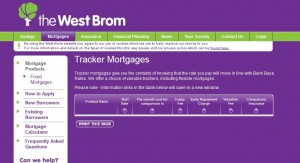 West Brom Building Society state: “Tracker mortgages give you the certainty of knowing that the rate you pay will move in line with Bank Base Rates. We offer a choice of variable trackers, including flexible mortgages”

Unless, of course, West Brom change their minds and decide they’re not making enough money.  In that case, and to ensure their staff still benefit from over-inflated salaries, gold-plated pensions and colossal bumper bonuses they will find a tiny get-out clause which they’ve tucked away for such times as for when they want to screw consumers.  Then West Brom will increase the rate you pay regardless of what Bank Base Rates are doing.  This month, they’ve decided to fund, what I can only imagine must be their Christmas party, by increasing the tracker rate by 2% in December.

Who knows what it will be January.

Of course, I probably should have known all this.  I mean, my mortgage contract may state the rate I am going to be paying over Bank Base Rate for 25 years, but what was I thinking when I believed that.

I mean just how dumb was I?

Hadn’t I read the separate booklet which was never referred to in any mortgage documentation, nor informed that it was an incy-wincy tiny-bit important?

This booklet which is full of words so small and incomprehensible even Stephen Hawking refused to translate it for me.

And it even took The Daily Mail considerable time to locate the hidden clauses.

But the confusing thing about this whole tracker mortgage fiasco is that if the mortgage does not track Bank Base Rates – as I thought it did, and as West Brom’s literature and mortgage contract claims it does, then this entire product is complete bullshit.

And so is the certainty West Brom claim you have with their mortgage tracker product.

The one thing I am certain of is that West Brom BS stands for: West Brom Bull Shit

The other thing I am certain of is this: if West Brom get away with this rate-hike every single mortgage holder with a tracker product is in trouble.  And I mean trouble.  Really deep trouble.  Especially when Bank Base Rates rise again – which they will.  Then you’ll really understand the depth of this trouble.

Which is why I have signed up for the legal class action to fight West Brom.  And I urge you to join.  You may not have a mortgage with West Brom – but unless we fight West Brom – your lender will most likely follow suit.  And then you’ll realise the trouble we are all in.

“We’re All In This (shit) Together”