I swear to God this is what the buyer said when they saw the flat they bought at auction.

Just look at it: 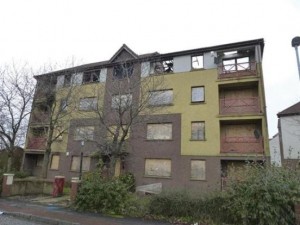 Now I have never been to Motherwell – which is a suburb on the outskirts of Glasgow – but let me tell you even WITHOUT a roof and windows a 3 bedroom flat with a guide price of just £2,500 has got to be F**KING AWFUL – which is the complete opposite to my favourite word of the month: AWESOME.

Which this flat clearly is not.  And neither, do I believe, is the place.

Motherwell, although I have never visited it, I believe is a hole.  And if it’s not a hole, it should be in a hole.  And then it should be covered up very rapidly by some incredibly industrious badgers who like covering holes.  That’s the sort of hole I think it is.  Although – a covered hole would be the preferred option.  By the aforementioned badgers.

I tried to go on google maps and streetview Motherwell.  But it hurt Google’s eyes.  And my laptop refused to talk to me.

And then I used my iPhone.  Which turned itself off.  Which isn’t surprising – it is an iPhone.

And now I have pondered some more on my spurious assertions about this roofless, windowless 3 bed flat with a guide price of £2.5k in a place which I have never visited, but nevertheless believe should be covered in a hole, very deftly and very quickly.  By badgers.

And then I wondered if I was being unkind, because I found a former photograph from some sort of hidden archive (the secret love society of Motherwell) which shows the flat with windows and a roof.  Although, it has to be said: it is still in Motherwell.

But I guess that was them *halcyon* days where everything was just plain peachy.  And everyone was high.  That was before the trees refused to grow.  And even the badgers didn’t want to dig: they were probably too high.

And it occurs to me that in all my revelry of Motherwell I still know nothing more.

And so I bribe Mr Google to work for me.  I stroke his googley legs and arms very seductively.  Lustfully, even.  And he spits out the following with a disgusted electro-burp and I feel vindicated.  Even if it is virtual.

Because here is the living proof – word-for-word from someone who had the misfortune to live in Motherwell.  But they made it out alive.

Before the badgers moved in.

“Motherwell, what a sh*thole

I had the misfortune to live in motherwell during my formative teen years, and also met my now ex-wife there (so i suppose i am slightly biased).

motherwell is between hamilton and bellshill, and seems to attract most of the pond life from there and other sattelite towns so they can congregate in “strathy park”. now dont let the “park” bit of the description mislead you, most of the green space is used up by dead tramps, used needles and empty buckfast (or fu*k fast) bottles, and as such i would not recommend taking the kids down for a picnic.

if you manage to treck through thie no-mans land inhabited by gold wearing saliva dripping monkeys without getting mugged/stabbed/infected/leg humped, you will come across an “amusement park” (i use the term very loosely) which is a mecca to the pram pushing chavettes, all looking for the father of their offspring (as most of them were concieved in the adjacent car park). they remind me of salmon, returning to the place of their birth to spawn more little snotty nosed primark clothed under nourished (fruit pastells are not part of your five a day)little darlings.

to be fair, its not the kids fault…..when your main role model is “anna marie, fae the moerwell young crew” who loves nothing more than letting drugged up chavs sh*ag them, then knock them about, and whos main highlight is nothing more than to skip to the local asian corner shop on giro day, and buy as many richmond fags and buckfast as her “brew” will allow.

so all in all, avoid motherwell, in fact, avoid lanarkshire, in fact (and as a scotsman i say this with a heavy heart) avoid the south of scotland all together”

Quoted in entirety from: Chavtowns