As a Non-American, AWESOME is a special occasion word – which is a shame as “awesome” is an awesome word and one which I feel we should all use more often.

But today, in Sam-land – awesome is here to be used and abused: because I am feeling AWESOME. 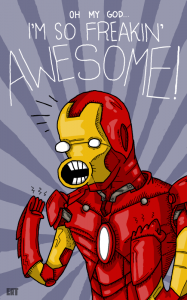 Today I am holding a copy of my signed and sealed book publishing deal contract.  And I reckon that makes today pretty awesome.  But perhaps, what is even more awesome is how close to NOT happening this book deal almost was.

Then one fine day last year, I realised there was not a book out there which comprehensively guided you through the entire process of buying property at auction.

I was astounded.  Homes Under The Hammer have been on air for a gazillion years and I couldn’t believe they had never published a book.

But the fact was, they hadn’t.

And so I mused.

I mulled and pondered over the issue.

And then I started writing.

I wrote the outline, a proposal and a sample chapter and sent it off to a few agents and one publisher.

And then I heard nothing more.

Well, that’s a bit of an over-simplified way of saying nothing more happened (which it didn’t) but, if you want the more detailed version, what actually happened was: out of the 4 agents I contacted, 3 said “No, too specialised”.

The fourth agent (who appeared to be very impressive and had at least one author in the New York Times Best Seller List every week) seemed pretty lacklustre when it came to me.  But, he informed me he would take a “punt” on me and in return I would give him 15% of my global earnings on ANYTHING I EVER did ANYWHERE.  Yes, that’s right.  15% of ME went straight to him.

And I got the distinct impression I was meant to be grateful to him for taking this “punt” on me, which in return would see him owning 15% of my future life anywhere.

But, you know I didn’t feel grateful one iota.  I don’t buy into all that “I am so lucky” shit.  You’re lucky, because you make you’re own luck.  That’s my view.

So anyway.  That all happened.  It was all a bit boring and non-eventful.

Then I got busy and sold my agency.

Then I got bored and wondered what to do with my life.

Then I thought I should write my property auction book again…and in the meantime meet with some people who knew what they wanted to do with their lives.  I figured their “directional-knowledge” may help me with my next adventure and what I should do when I grow up…

So I met with a guy called James Dearsley.  He contacted me to meet up and discuss Augmented Reality.  It was a bit random and I didn’t have a clue what he was talking about.  But it sounded clever and funky and I thought I should meet him.

And we didn’t really talk about Augmented Reality.  Because it turned out James used to be a bee-keeper, and had written a book.

*WOW* I was so super-impressed!

So I told him.

I shared with him my desire to write my property auction book and how I got side-lined, distracted, put-off and everything else.  And then how I had recently decided I was going to focus again and get it finished and self-publish it.

He looked at me with disdain.

“What a cop-out” he said, scornfully.

“You, of all people should not self-publish.  You are a great writer and you should get a proper publisher”

I tried to explain to him all the reasons why I was going to self-publish, but he rebuffed them all with such contempt I ended up feeling like a complete and utter dick-for-brains.

And I left the meeting feeling like a complete loser.

And I was really quite annoyed.

So I decided to ignore him and just focus on writing again.

I was going great guns and just a couple of days later I saw my ex-boss from my marketing days.  He asked me what I was doing now without the agency and I excitedly told him about the property auction book I was going to self-publish.

“Are you crazy?  What sort of damp squib are you going to look like if you self-publish.  You should know better than that, Sam.  Get yourself a proper publisher and do it properly”.  He chastised.

I was pretty pissed off.  I was hugely excited to be writing a proper, actual book and I didn’t get why me self-publishing made me such a loser.

And I was feeling really quite annoyed by the whole situation.  So I emailed the one publisher I had emailed a few months previous with the following one-liner:

“Hi,  I was just wondering if you had any news for me with regards my book proposal?”

I kept it brief and to the point as I didn’t expect a reply, or anything more to happen.

Imagine my sheer and utter f**king amazement when 10 minutes later the publisher replies to me:

“Yes, glad you reminded me, had forgotten about this – we have an acquisition meeting at the end of the month and we’ll present your proposal then”

I sat there looking at the email again.

I sat there looking at the email again and my google findings.

Seriously, could this actually be happening?

The end of the month was the following week.

The following week, I get an email from the publisher with an invite to a pub lunch.

Over a brie, bacon and cranberry sauce baguette they offer me a publishing deal.

I try very hard not to squeal like a pig on heat and act all business-like.

We negotiate contracts, clauses, copyrights and all other such manner of fascinating bits-and-bobs.

Until we reach an agreement – and signatures.

So now the deal is done.

The book is almost ready (in the background I have been merrily scribbling away and crossing my fingers that all will turn out OK).

And the funny thing is, without the random words of (what I took at the time to be unkind-ness) this book publishing deal would never have happened.

So the moral of the story: Use feeling like a loser to become a winner.