Like a shopaholic finding an original Gucci handbag in Poundland, a lot being sold NO RESERVE at auction is a property buyer’s wet dream.

Seriously No Reserve means just that: the property will sell for whatever someone is willing to pay for it – which could be – not a lot.

So I wanted to get to the auction where the seven lots with No Reserve may potentially sell for “not a lot” on the off chance of bagging a bargain.

Three bits of land had taken my fancy which were being sold by the Highways Agency.  This meant, for the most part, they were close to roads.  Which is a good thing because I seem to have got rather obsessed with the idea of owning some roads.  Admittedly, I’m a little short on ideas with what I would do with a road, so I think owning land next to a road is probably a better option.

So the first lot I fancied the look of was a scrap of land (0.062 acres) in Sandy, Bedfordshire. 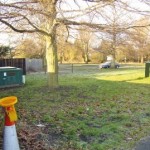 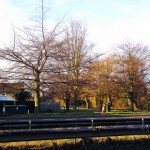 It piqued my interest as there was a 99 year lease with Transco for their “Gas Governor Station” which was situated on the land.  I figured there would be some rental income – plus maybe even the future potential of redevelopment of the site.  That was until I realised the “Gas Governor Station” was in the way of any redevelopment ideas I may have had.  And then there was the small issue of the rent which Transco would be paying: one peppercorn per year.  Call me old fashioned, but I prefer pounds to peppercorns and so I decided to pass.

The next site I fancied was in Ely, Cambridgeshire. 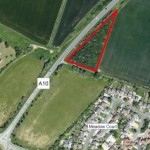 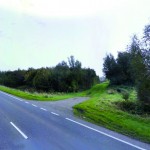 Adjacent to the A10 and comprising a freehold site of 1.193 acres.  The land was mainly woodland – which for a tree-loving potential lumber jack such as myself – was right up my street (!).  I have no idea how to value woodland next to roads, so I decided a nice round figure of £5,100 would be my bid.  And as the bidding started at £50 I thought I may be in with a chance.

So that left me with my “star lot” which I really did fancy: a freehold wooded site of 1.045 acres adjacent to the A1M in Stevenage. 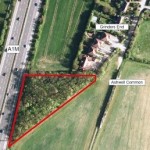 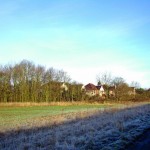 Now for me, Stevenage is just down the road and beyond the obvious usage of this land as a personal garden extension where I could spend many happy evenings with a glass of wine and watching the traffic sail by, I also know the local council are under massive pressure to build more houses.

I know it’s speculative and a bit of a “bottom drawer” investment, but I decided – you never know…

And so I had done my research on the site and what I had noted was, besides access from the A1 (which is a major motorway to London) the site was in fact land-locked.  The bit where I would need access, if I was ever going to redevelop the land, needed access from the less major road.  But if you look closely, you will see a tiny strip of land is not included in the parcel of land for sale. (I have highlighted it yellow).  This is what is known as a “ransom strip” – because whoever owns that strip can hold you to ransom when you want to access your land! 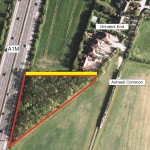 So I pondered some more.

And while sat in traffic on the A1 and gazing at (what I thought to be the piece of land) I happened upon what could be a “top idea”.  I decided I could build a mini-service station.  I could call it “Sam’s Services”.  I know it’s a long shot – but I thought “just maybe”.

I know the chances of success are pretty unlikely – however if redevelopment was possible – there could be some stunning rewards on offer.

So I decided my limit was my cash ISA for the year.  I didn’t do any fancy pants mathematical calculation – because in all honesty, this is a complete gamble.  £5640 was my bid limit.

I admit: it was a churlish bid limit.

Sam’s Services in Stevenage will not be opening in the near future:  it sold for £8,000.