Today I’m going to share a story with you – it’s called David’s Story. David is a real individual.  But I do not believe his case is individual – I believe this sad story happens many times over in our modern society.

This handwritten letter was received by David:

Due to the fact that I could not afford the rent shortfall each month and being in and out of the hospital most of the year I had no choice but to become homeless.

I have nowhere to go so could not take my belongings with me. If you can use them for another tenant then please do.  Please keep my rent deposit to pay off some of what I owe.

I am sorry for how things have turned out, I am very ill and my life is a complete mess.

If you need to contact me, you have my number, but you may have to leave a message as I will be in hospital.

Please tell Sam I am thankful for all her help.

So let’s go back to the start – that is: June 2009 when David walked into the letting agency I own. He is homeless and an alcoholic – but he is trying to get clean.  He has been chucked out of the Salvation Army and he has nowhere to go. He begs me to help him.  He is 32 years old – just a couple of years younger than me – the same age as my younger brother. He is destitute and desperate.

I call the council and explain the situation, they talk with David over the telephone and he goes down to see them. An hour later they call me and ask if I would be willing to re-house him as they have assessed his circumstances. He is homeless, they have nowhere to put him and he will have to sleep on the streets unless I take him in. They agree they will pay his rent in full and pay a deposit upfront.  They agree that all future rent payments will be made direct to me as he is vulnerable. They fax confirmation that this will all be paid within a matter of days. I move him in that day.

David assures me he will not let me down. He is grateful for this opportunity to try and rebuild his life and he will make a real go of it.

The first month’s rent and deposit was received from the council via BACS within a matter of days.  But the next month – nothing.  I call the council and ask what’s happening.  But nobody knows anything of what’s been agreed – even when I produce the fax.  I try to get hold of the original member of staff who had agreed everything with me – but to no avail. I am passed from pillar to post.

Some 10 weeks later and I receive a payment into my bank account and a breakdown from the council.  I check the amounts and see that the rent is over £100 short per month. I call the council and query this shortfall.  “That’s all David’s entitled to. He is only entitled to a single room rate”. But, I reply “This is a 2 bedroom house and you agreed that you would pay his rent – how can you go back on this?”.

Weeks go by and I try calling different people in the council, trying to escalate the query – but I get nowhere. They now state that David has to make up the difference.  “But, he can’t afford it!” I tell them “and you told me you would pay the rent in full for him because of his circumstances”. It falls on deaf ears.  The council are no longer interested – David not paying rent is now my problem, not theirs.

6 months in and the council have now reduced the rent even further – so much so that I am now more or less paying for David to live in my property.  I explain to him gently that the council are not paying the rent they said they would and, while I would love to continue to help him, I also have bills and a mortgage to pay.  At this stage David is in such heavy rent arrears I knew there was no way it was going to be paid.  He tells me he will go to the council to try and sort it.

Then I hear nothing. I try to call him but his phone is switched off. I try calling round but he is never in. All letters go unanswered.

I don’t know what to do. The rental arrears are building at an alarming rate and nobody at the council can help – added to that I can’t even get hold of David.

Then out of the blue some weeks later, he calls me:

“Sam” he says “I am so sorry, I had my phone nicked and I’ve been in and out of hospital that’s why you couldn’t get hold of me. I promise you I will sort this. I’ve been to the council; I’m trying to sort it.  I don’t know what to do, they said they would pay the rent and now they’re saying they won’t pay it. I don’t know what’s happened. I really am sorry. I want to stay and I’m trying to get myself together”

He sounds so desperate. And, I too, am desperate. I want to give him a second chance. I don’t blame him. It is the council at fault. He is just trying to get on with his life.

“Right” I say “I have a plan. If you want to give this a proper go – here’s what I’ll do. I will forget all the rent arrears up till now and reduce the rent on the condition that you start a payment plan for the future contributions towards the rent”

The rent arrears at that point totalled several thousand.

“That would be great – yes, I’ll do it – I’ll pay every week” David replies

We agree that I will send him some bank paying in slips and he will start the next week. And so he does. In the meantime I contact DWP for him to see if he can get any assistance for top ups due to his circumstances. I inform David and he tells me will go and see them.

Money goes in every week. For four weeks. Then it stops. I call him. He tells me he has received the water rates bill and it was £235 and he had to pay it otherwise he would have no water. He was scared of getting cut off. I explain to him that he could’ve paid the water rates monthly, not all in one go!

The next few months’ communication is sporadic and payments stop altogether. He is in and out of hospital all the time. He kept apologising for letting me down.

I don’t know what the final tipping point was or why he felt he suddenly had to leave.  But I know I am sad for David.  I am sad the system let him down so badly. I am sad that I could not afford to help him more. He was clearly ill and needed help.

This used to be a clean and tidy house: 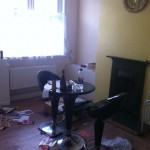 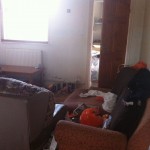 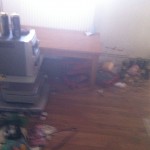 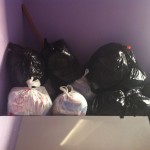 David never had a proper bed – I offered him one, but he said he was happy with his “bed”: 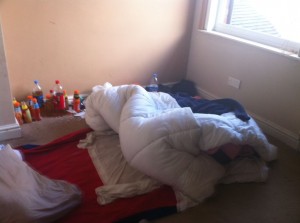 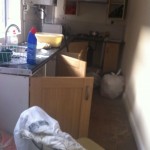 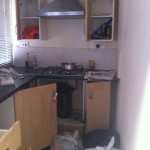 There are many discarded beer cans and cigarette butts… 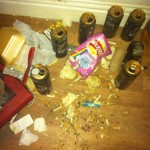 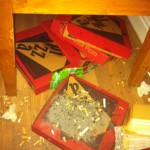 And so there I am today with my scruffs on and some heavy duty gloves and I am ready to do business. I am going to get this property back in shape!

So I decide that I may as well start clearing all the rubbish (there was a 2 week wait for the council’s bulky rubbish collection and the cleaner had quoted £650!) here is my first trip to the skip – I had another 7 car loads like this: 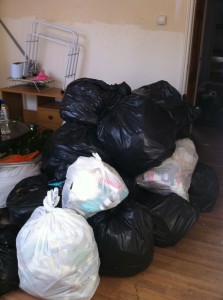 So there I am clearing up and moving the beer cans into the rubbish. And I’m surprised because some of them feel half full – “Gosh that’s odd” I think to myself, “Given he was an alcoholic, I wouldn’t have thought he would leave any beer in a can”. And so I grab 4 cans and turn them upside down in the kitchen sink to drain – while I went back to the other room to collect more…

I was just turning back with more cans in hand when I got closer to the kitchen sink “What the hell is that smell?”

In that moment I realise that the half full beer cans are actually full with human urine…and the bottles all over the house…they were also full of urine!  They are everywhere… 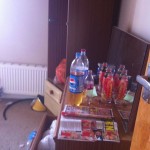 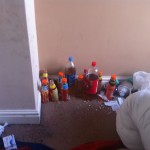 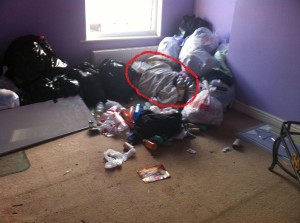 And then in the bedroom hidden underneath a draped sheet (circled above)- I find this orderly collection: Words Fail Me. 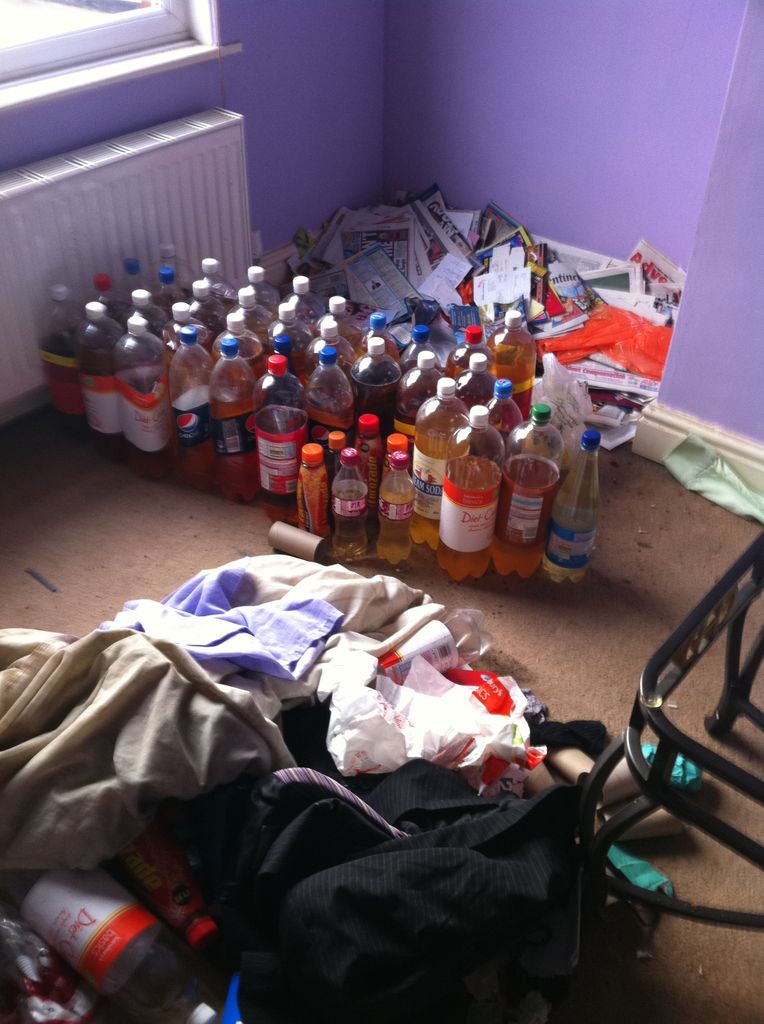