Today I went to see what sounded like a great investment in Cheshire. It was a terraced house which had been converted to 3 flats.

One of the flats was tenanted and had an annual income of £6k. It also had two vacant flats and a potential total rental income of £15,600 per annum.The guide was a measly £50k.  Just imagine the yield if you bought it at guide – yes an astonishing 31.2%!!

HOWEVER….all that glitters is not gold – and that is certainly the case for auction properties (especially those that have such a cheap guide!)

So let’s start with the uglyness of this building…yes truly I think even it’s mother would give it away for adoption: 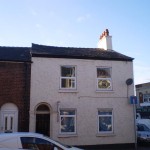 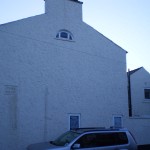 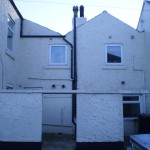 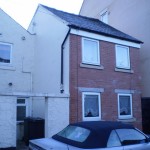 What you will see from the photos is that the previous owner (now bankrupt – the administrator is selling) has converted every spare inch possible. And that includes what I reckon must have been a former shed/ outhouse.  Of course, there is nothing wrong with that…but there are several things you need to be aware of:

* This conversion most likely does not have planning permission. That means in the future the council may take enforcement action and you will either have to apply for retrospective planning (if they will allow such a conversion), or apply for a certificate of lawful use (and you will have to prove 4 years continued use).  This is a planning risk which needs to be factored into your costs when you are thinking of purchasing such a building.  You also have to be aware of how planning policy changes and what impact that may have on your development (The lack of adequate parking is a big issue with this property in the eyes of the planning department and may prove a major obstacle if you did try and obtain planning permission)

* This building is also unlikely to conform to current building regulations. That means it’s essential to have some “rainy day fund” in case the enforcement officer decides that you have to undertake upgrade works to ensure it will comply.

Another issue which is not apparent from the photos – is the difficulty you will get in lending on a property like this. Banks do not like properties which have been sub-divided in such a manner and most often classify them as HMOs (House of Multiple Occupation). This is a specialist area where very few lenders operate. This means the property has limited market appeal (mainly other cash investors) and creates a ceiling on the price which is derived mainly from the potential rental yields.  As an income/ cash investor this is not an issue. However, what it does mean is that capital growth will usually remain stunted for these types of properties. Therefore, any capital invested in the building should always be targeted at improving the rental income stream.

But let’s get back to the property….

The property looked as though it had been renovated quite recently, and while not the greatest finish – the kitchens and bathrooms are adequate for rental properties.  With some finishing off, making good and some upgrades the bathrooms and kitchens could be made functional. 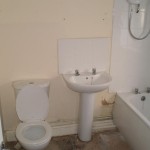 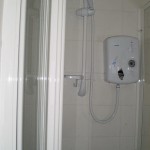 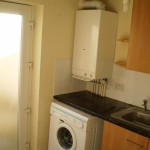 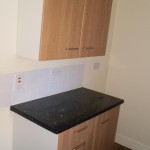 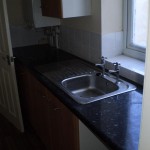 The bedrooms and lounges were also in good condition and only required minor repairs to get them ready to let. 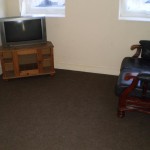 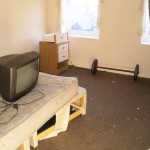 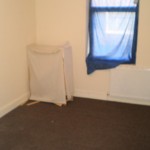 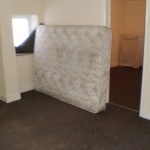 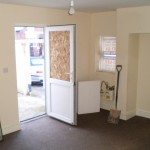 However, while the surface decor looks acceptable on these properties. It is actually the fabric of the building which is the major concern for me.

The roof is sagging on all properties and will need replacing – by the time you get the scaffolding and roofers out this has got to be at least £10k.  Furthermore, I suspect the actual walls of the building are poorly insulated and this was confirmed by the tenant living there who had her heating on full blast and the flat was still freezing with all walls cold and damp to touch. Moreover, I also suspect the vacant flats (in rear extension of the building) to be single brick. This means the building will never retain any heat, it is not insulated, nor was it designed to be a habitable building.

In my experience, tenants in cold properties tend not to stay and the property will develop further issues related with the cold. Mould and damp is a huge issue and will lead to accusations of causing ill health. Moreover, because the property is so cold, windows are rarely opened which means the property lacks adequate ventilation creating further issues to the fabric of the building. Lastly, you also need to remember that these types of flats will rent to people who are cost conscious and more aware of their heating bills.  The current tenant (who had given notice to leave) claimed she was spending £7 per day trying to keep the flat warm and was failing miserably. This again, will mean that these flats have high churn – which would have an impact on the potential rental yield.

Given the mould and damp that was starting to penetrate, and the cold clammy walls I think the only way you could make this building work as a successful rental machine would be to actually build cavity walls and insulate the property.

However, this is then a major job which undoes much of what you see here.  You would in effect be re-building the properties from the inside. You would need to build the walls (most probably in breeze blocks), plasterboard, skim and decorate all again….but the knock on effect of such major works is that you would end up moving the kitchens and bathrooms (which because they’re poor quality would probably break), then you’d end up re-wiring and replumbing the entire building (which I doubt would conform anyway!)

So on the surface while this building looks like a bargain property with fab yields – in essence, it’s a money pit – and a very ugly one at that!