Today was not a good day.

I had been warned by the letting agent looking after my property in Derby that the property was a mess and the tenant lived like a pig.  They had issued letters for him to clean the property and the council had been called out several times by neighbours as the yard was an environmental hazard (note always do as the council say otherwise you can get into a lot of legal trouble!).

The tenant was an elderly guy who was ill and who really needed to go into a home as he was unable to take care of himself. He had family who came to visit the house but they did more harm than good (think of an episode of Shameless and you know the sort of people we’re dealing with).  In fact, the family caused a whole lot more trouble than the tenant and the police were regularly called by the neighbours as the kids were fighting, setting fire to the sheds and climbing on the roof…

Finally after months of liaising with the council, serving notice and a load more paperwork the tenant was finally re-housed in council accomodation….

So it was time for me to re-enter the property:

Here is the lounge: 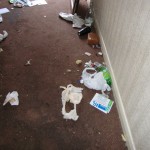 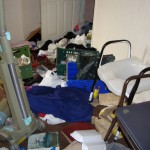 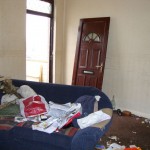 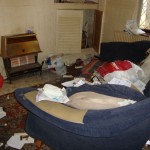 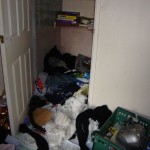 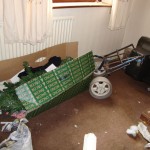 Now you may notice that the property is a bit of a mess from the above photos….

You may also notice the front door is propped up against the wall rather than being attached in the door frame. This is because the door has been kicked in and was off it’s hinges….

Here is the kitchen: 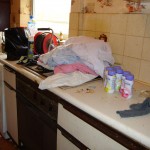 I did not even have the courage to photograph the insides of the cupboards – there was milk that had been kept in the cupboard for months, bread that was so old and mouldy it had disintegrated into grey powder and the mould was growing all internally in the cupboards. There were plants for the garden that were growing at the bottom of one of the cupboards!!!

And then we go upstairs to the bedrooms: 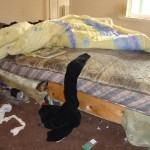 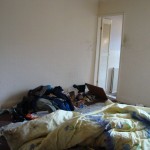 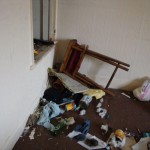 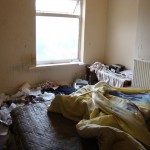 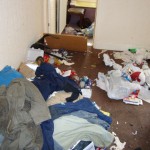 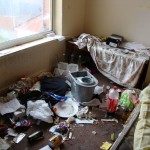 And it really annoys me that amongst all these belongings the tenant couldn’t find something to use as an ashtray rather than the floor! 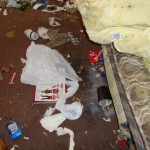 But then in all this mess I guess they never noticed…. 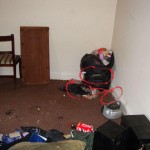 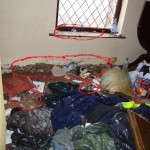 I am on the phone to the agent…I had had 2 women (one of whom looked out of her face on drugs) come to the property claiming to be his daughter-in-law and going mental about her son’s fishing net.   I was really quite dumb struck – you leave me a shit hole like this to clear up and you’re going mental about a bloody fishing net!!!!!

So there I am on the phone to the agent…and as we only had 3 hours for the skip I am having to move stuff while juggling with the phone.  And so I start dragging this chair across the room…and suddenly I am hit by the most unbelievably disgusting smell. It makes me instantly gag and I turn round to see I have just moved a commode which was full of human urine and feaces which I have just started to spill on the carpet.

The putrid smell is overwhelming and quickly floods through the house. Mick who is in the kitchen starts shouting at me and is then outside throwing up, Will is wretching and has fled outside.

I am stood there on my own with a full commode. SHIT! (literally) . I have to move fast.

I grab the commode and get it out in the street and quickly find a drain which I can pour it down.  I am desperately trying not to breath so that I don’t have to smell THAT smell.  The stench is all throughout the street and the house….

AND THEN….just when you think things couldn’t get any worse…. 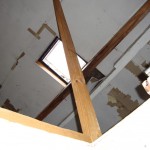 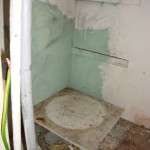 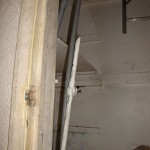 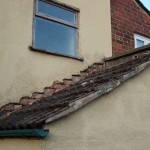